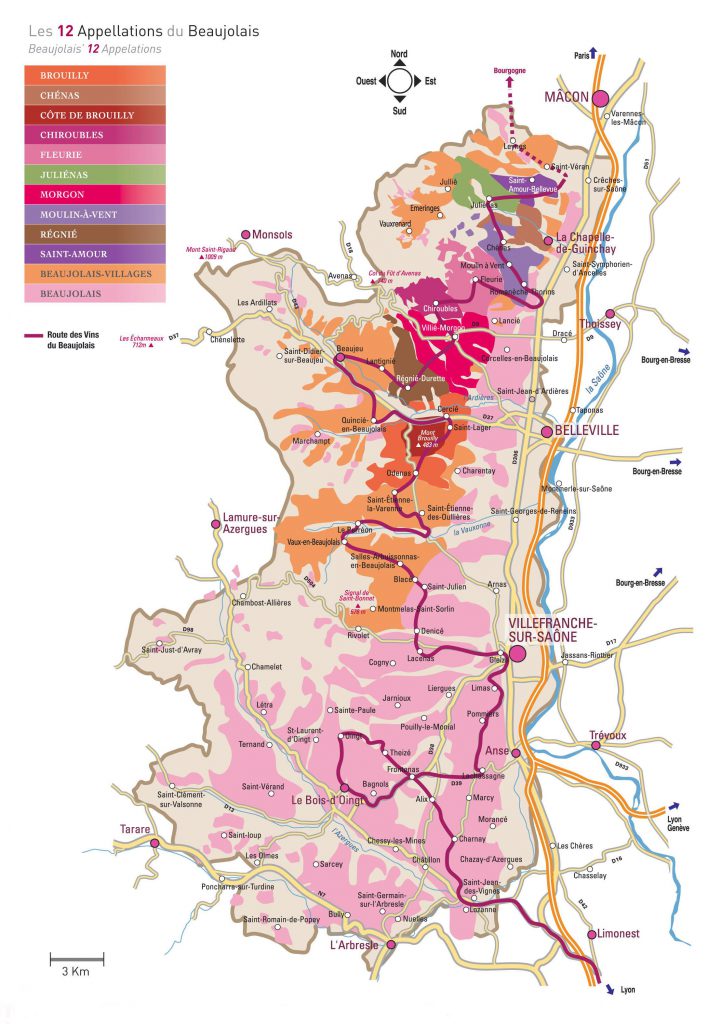 Whites from this region, which make up only 1% of its production, are made mostly with Chardonnay grapes though Aligoté is also permitted until 2024 (on condition the vines were planted before 2004).

Beaujolais tends to be a very light-bodied red wine, with relatively high amounts of acidity. In some vintages, Beaujolais produces more wine than the Burgundy wine regions of Chablis, Côte d’Or, Côte Chalonnaise and Mâconnais put together.

While administratively considered part of the Burgundy wine region, the climate is closer to the Rhône and the wine is sufficiently individual in character to be considered separately from Burgundy and Rhône. The region is known internationally for its long tradition of winemaking, for the use of carbonic maceration, and more recently for the popular Beaujolais nouveau.

About a third of the region’s production is sold as Beaujolais Nouveau, a marketing name created by George Duboeuf for the local vin de l’année. It is the lightest, fruitiest style of Beaujolais and meant for simple drinking.

The grapes are harvested between late August and early September. It is fermented for just a few days and released to the public on the third Thursday of November – “Beaujolais Nouveau Day”.

It is the first French wine to be released for each vintage year. In 1992, at its peak, more than half of all Beaujolais wine was sold as “Beaujolais Nouveau”. Yearly around 55 million bottles are being sold true-out the world. Many wineries in and outside of France try to imitate the same success as Beaujolais Nouveau has, but fail at it. Its one of the greatest marketing stunts ever created next to champagne of course.

The wines are meant to be drunk as young as possible, when they are at their freshest and fruitiest. They can last up to one or two years but will have lost most of their characteristic flavors by that point. 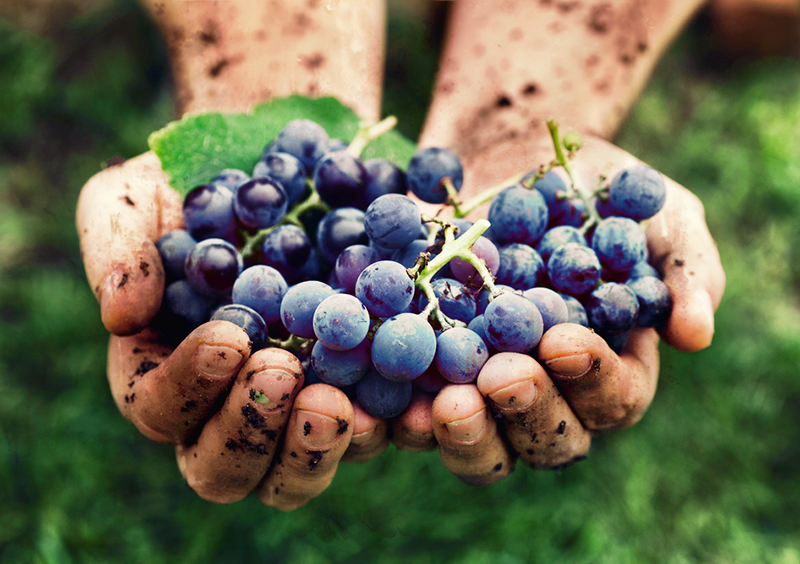 The ten Beaujolais Crus differ in character. The following three crus produce the lightest bodied Cru Beaujolais and are typically meant to be consumed within three years of the vintage.

The next three crus produce more medium bodied Cru Beaujolais that Master of Wine Mary Ewing-Mulligan recommend needs at least a year aging in the bottle and to be consumed within four years of the vintage.

The last four crus produce the fullest bodied examples of Cru Beaujolais that need the most time aging in the bottle and are usually meant to be consumed between four and ten years after harvest.

Beaujolais wines are produced by the winemaking technique of semi-carbonic maceration. Whole grape clusters are put in cement or stainless steel tanks with capacities between 4,000–30,000 litres (1,100–7,900 US gal). The bottom third of the grapes gets crushed under the weight of gravity and resulting must begins normal yeast fermentationwith ambient yeasts found naturally on the skins of the grapes. Carbon dioxide is released as a byproduct of this fermentation and begins to saturate the individual intact grape berries that remain in the barrel. The carbon dioxide seeps into the skin of the grape and begin to stimulate fermentation at an intracellular level. This is caused, in part, by the absence of oxygen in the winemaking environment. This results in a fruity wine without much tannin. In the case of Beaujolais nouveau, this process is completed in as little as four days, with the other AOCs being allowed longer time to ferment. As the grapes ferment longer, they develop more tannins and a fuller body. Maximum length of the cuvaison for Nouveau wines is limited to 10 days.

After fermentation, the must is normally high in malic acid and producers will put the wine through malolactic fermentation to soften the wine. The process of chaptalization, adding sugar to the grape must to boost alcohol levels, has been a controversial issue for Beaujolais winemakers. Historically, Beaujolais producers would pick grapes at ripeness that were at minimum potential alcohol levels of 10-10.5% and then add sugar in order to artificially boost the alcohol levels to the near the maximum of 13-13.5%. This created wines lacking structure and balance to go with the high alcohol body and mouthfeel. The recent trend towards higher quality wine production has limited the use of chaptalization in the premium levels of Beaujolais wine. Filtering the wine in order to stabilize it is practiced to varying degrees by Beaujolais winemakers. Some producers who make Beaujolais on a large commercial scale will filter the wine aggressively to avoid any impurity or future chemical reactions. This can have the negative side effect of diminishing some of the wine’s unique fruit character and leave a flavor that critics have described as Jell-O-like.

Basic Beaujolais is the classic bistro wine of Paris; a fruity, easy-drinking red traditionally served in 1 pint glass bottles known as pot. This is epitomized in Beaujolais Nouveau, which is fermented for just a few days and can be dominated by estery flavors such as bananas and pear drops. Basic Beaujolais and Beaujolais nouveau are meant to be drunk within a year of their harvest. Beaujolais-Villages are generally consumed within 2–3 years and Cru Beaujolais has the potential to age longer, some not even fully developing till at least 3 years after harvest. Premium examples from Chénas, Juliénas, Morgon and Moulin-à-Vent can spend up to 10 years continuing to develop in the bottle and in very good vintages can take on Burgundian qualities of structure and complexity